HomeAstronomy How the stars are born

How the stars are born 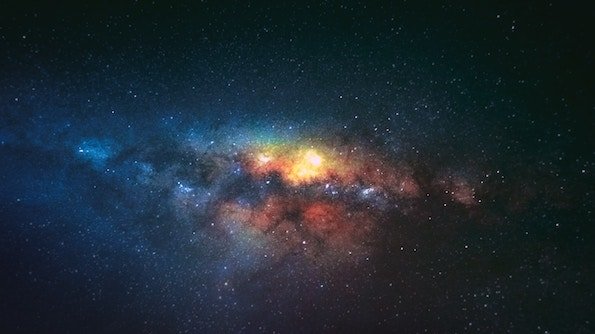 How the stars are formed

What is it a star?

Stars are giant balls of gas, mainly hydrogen and helium. In the core of a star, hydrogen join together to form helium. Sometimes the heat in the core of the star reaches 15 million C or even more. Imagine that a small grain of sand this hot could kill someone 100 km away.

The stages of the star formation have been worked out by cosmologists and astronomers. It is a continuous process and even now we know quite a lot about the way how the stars are born they still continue to study them throughout the space.

How the stars are born

Clouds of hydrogen, other gases and space dust gradually clump together under their own gravity, drawing in more matter and becoming denser. Eventually the matter becomes so hot and dense that the centres, or nuclei, of atoms begin to join or fuse. This nuclear fusion gives off light, heat and other rays and energy – the star shines. This process probably first started to happen around 200 million years after the Bing Bang. Before this, it was too hot and energetic for atoms to undergo nuclear fusion.

The Sloan Digital Sky Survey ( SDSS) is a project to map and measure the distances of millions of galaxies, stars, and other objects from Earth. The survey is specialised to detect the feature called red shift. Combined with other evidence, this indicates the distance of a star or a galaxy from Earth and the direction and speed at which it is moving. The SDSS uses an optical reflecting telescope with a mirror 2.5m across the Apache Point Observatory, New Mexico US.  The survey’s result in effect looks far back in time by detecting extremely distant stars and other objects.  Light from the objects has taken billions of years to reach us, so to us now, they look like they did soon after the Bing Bong.